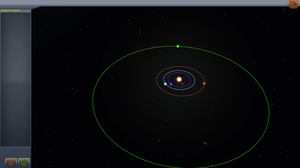 The Kerbol System consists of six planets that may be orbited by moons and/or asteroids. Each of these bodies exhibits its own characteristics like gravity, atmosphere, size, orbital inclination, and orbital period.

Here is the list of planets in order of their distance from Kerbol (Sun):

Moho is the closest planet to Kerbol and the one that spins faster around Kerbol. It is an analog of Mercury and has no moons. It has an orbital inclination of 7.0 degrees, and 1 mohoian year is 25 kerbin days, and 15.5 hours. It is impossible to achieve a geosynchronous orbit around Moho. Its equatorial radius is 250 Kilometers.

Eve can be considered an analog of Venus, but it varies in some aspects, such as its larger size than Kerbin. It has a strange purple atmosphere and soil, but its landscape has plateaus and what appears to be maria in the dark purple spots. It has one natural satellite, named Gilly (the smallest moon in all the Kerbol system). Gilly has a highly elliptical orbit, and high orbital inclination, in a way that it’s hard to enter and get an entry.

Gilly is a small captured asteroid orbiting Eve in a highly elliptical orbit, and high orbital inclination. That combined with Gilly's small sphere of influence makes it very hard to get a flyby of.

Kerbin is the home planet of the Kerbals. It is one of two water worlds in the Kerbol system the other being Laythe. Kerbin has high gravity and a large sphere of influence. Geostationary orbit can easily be achieved on this planet. Kerbin gives the least amount of science than any of the planets in the game. Kerbin has two natural satellites which are the Mun and Minmus.

The Mun is the Kerbal Space Program analog of the Moon. The Mun has similar gravity to its real life counterpart. It has no atmosphere making parachutes useless. Landing on the Mun requires some Delta V. The Mun gives very little science compared to the other moons and planets of this game.

Minmus is an ice world and a very small asteroid sized moon orbiting Kerbin not far away from escaping its sphere of influence getting a Minmus encounter can be tricky sometimes, it may be n more viable option than the Mun since reaching orbit or landing there requires a lot less delt- V.

Duna is a planet similar to Mars, but some noticeable features are the unusually large tilts, and it has a relatively small diameter of 320 km. It has one moon named Ike. It is a large moon similar to the Mun in size.

Ike is the moon of Duna. It orbits in a near geostationary orbit around Duna making, Ike, in the Dunatian sky making it seem like it slings to its sides. It has a large sphere of influence on Duna and getting a flyby of Ike is easy, but it can launch you out of Duna's sphere of influence, and this may or may not be a good thing.

Jool is the fifth planet from Kerbol. It is the largest planet in the Kerbol system, it has 5 moons: Laythe, Vall, Tylo, Bop, and Pol. It is the only gas giant in the game and resembles Jupiter from real life but green, so any landing attempt will result in the destruction of your vehicle.

Laythe is the first and closest moon of Jool. Laythe is a blue, watery planet with sandy islands on it. It also has a breathable atmosphere and which means Kerbals can remove their helmets on the moon.

There is an easter egg on Laythe; The Sagan Sea, referring to Carl Sagan.

Vall is the second and second-closest moon of Jool. It is an ice planet that is an analog of Europa, an ice satellite.

There is an easter egg on Vall; The Vallhenge, a Stonehenge-like set of blocks. Some have wedges on them!

Tylo is a rocky moon that is supposed to be similar to the Mun. It is the largest moon in the game and is the same size as Kerbin. It is an analog of Ganymede.

In real life, Ganymede is only larger than Mercury.

PS: There's an easter egg on Tylo. A cave-like formation, which between versions 0.2.1 and 1.0.5 [supposedly] was hidden beneath the surface. I think it's still up there to see for your own eyes!

Bop is a captured asteroid that is the fourth and second-smallest moon of Jool. It is an asteroid that's supposedly an analog of any of the 59 minor moons of Jupiter [not one of them is similar, supposedly]. This asteroid moon is home to the Deep Space Kraken according to the Kerbal mythology.

Pol, named after it's a similarity to a grain of Pollen, is the fifth and smallest moon of the Jool system.

Dres and Eeloo are dwarf planets. They are supposedly an analog of;

Retrieved from "https://kerbalspaceprogram.fandom.com/wiki/Planets_and_Moons?oldid=4772"
Community content is available under CC-BY-SA unless otherwise noted.