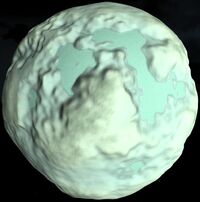 Minmus is a small moon of Kerbin. From the surface of Kerbin or Mun, it is a cyan speck one or two pixels wide which appears to slightly oscillate vertically. This is a result of viewing its rotation from afar. Up close, it is mint green in appearance with what seem to be icy buttes, large hills, and frozen lakes. The highest areas are over 5.7 km in altitude. It requires more delta-v to reach Minmus orbit than Mun orbit, however it is easier to land on the surface and return.

Synchronous orbit around Minmus is possible at an altitude of 357.94 km.

Minmus has a very uneven surface, with substantial areas over 5 km high and a maximum terrain elevation of 5725 m. The vast majority of the surface is rolling hills, with lakes of a frozen substance (or salt, as Minmus is too close to the Sun for water ice to form) concentrated near the equator.[1] The lakes are almost perfectly flat and mostly at datum altitude (0 m). Minmus also has some mesas which are so high compared to Minmus' sphere of influence, that they still count as in orbit according to the navigation tools. This makes landing on these plateaus more challenging, because the direction marker and speed don't correct for the rotation of the surface.

For most landings (non-plateau and non-lake), expect touchdown at an altitude of between 2000m and 2500m.

Retrieved from "https://kerbalspaceprogram.fandom.com/wiki/Minmus?oldid=4227"
Community content is available under CC-BY-SA unless otherwise noted.